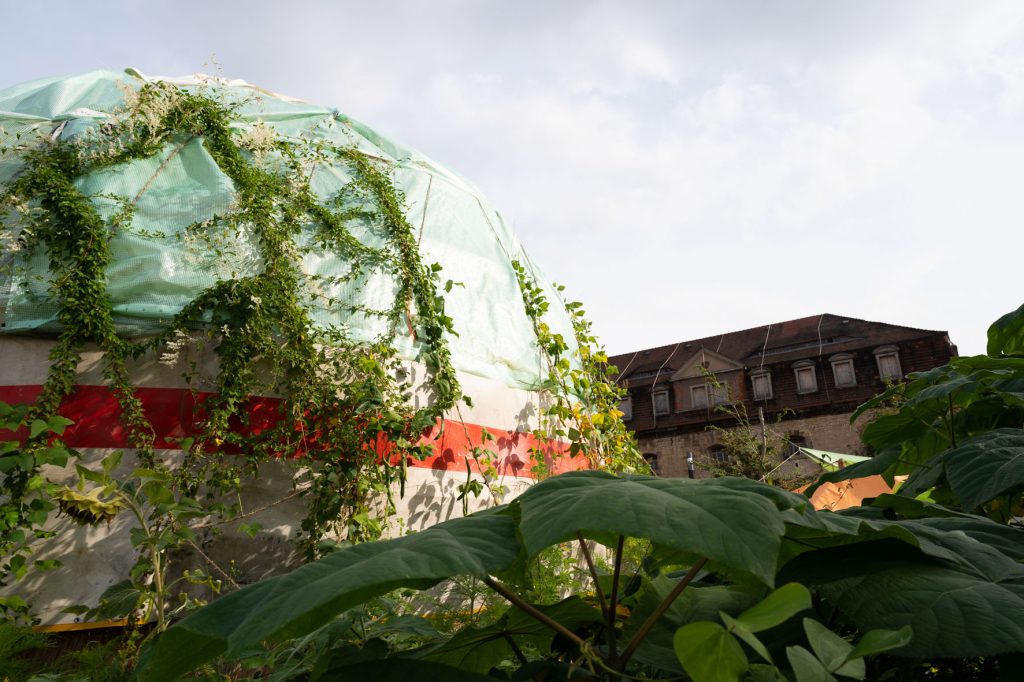 As volunatry actors in the “Garden of Associations” we, together with other initiatives and associations, organised ecological and transcultural education evetns in the conversation pavillion out of recycled materials.

More about the construction and principle of the geodome
The principle of the geodome, also known as the geodesic dome, was developed in the middle of the 20th century by the American architect Richard Buckminster Fuller. It consists of triangles of different sizes that connected form a spherical surface.
The principle also occurs in nature with the largest detected molecules, which were named fullerenes after the developer. This is convincing evidence of the stability and efficiency of the structure.
A soccer ball is probably the simplest and best-known form of a geodesic dome. As with classic balls, the triangles of our dome also form a network of pentagons and hexagons. The number of struts from one pentagon to the next is called frequency (v). Our dome has a frequency of 5v. The dome offers a special acoustic atmosphere: A speaker standing in the center hears themself amplified due to the sound reflection. People at the same distance from the center also hear another better in the dome than outside.
In total, we installed over 600 wooden strips in the 6m high dome. These come from old slatted frames, which are ideally suited for this due to their flexibility. All triangles differ in the length of the sides, although at first glance they look identical. The dome on the Petersberg consists of struts with 16 different lengths, all of which have to be put together correctly like a puzzle.
Geodesic domes are, despite low material input and large surface, extremely strong and stable. Any loads that occur are optimally distributed over the entire structure. So the dome can handle gusts. That is why they are often used in locations with harsh weather conditions, for example in the Arctic, in hurricanes, in space travel – or on the Petersberg. Like this our fragile-appearing lightweight construction out of wood and old foil defied all thunderstorms and summer storms despite its exposed location over the roofs over the city.